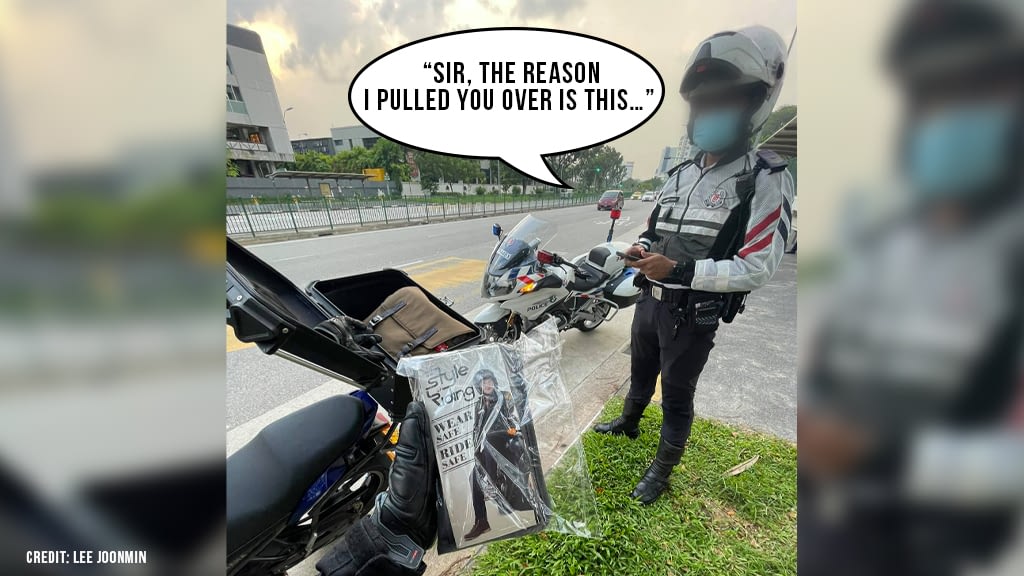 “I was wondering what mistake did I commit, did I overspeed? Did I ride dangerously? Or did I fail to signal or something?”

“I was wondering what mistake did I commit, did I overspeed? Did I ride dangerously? Or did I fail to signal or something?”

Imagine going home from work and you see the iconic blue & red flashing lights behind you!

Netizen Lee Joon Min shared his exhilarating experience on Facebook about the time when a Traffic Police office pulled him over!

According to him, when the TP officer was gesturing to him to pull over, he started worrying, like many would. In that situation, you’ll be overthinking about what you did wrong…

But who could’ve thought that he got pulled over for what he did right!

“Sir, the reason I pulled you over is this…” the TP officer said to him.

Lee then wrote that the next few moments was super awkward and silent, but when the office continued he finally understood why he was pulled over!

“I saw that you are wearing full safety gear – safety jacket, armoured gloves, so I’d like to present you with this gift for being a safety role model to other bikers.”

Of course, Lee was not expecting that! Who would expect getting awarded for being a good role model on the road?

What started as a panicking moment on traffic crime for Lee, quickly blossomed into a quirky but heartwarming experience! It’s really nice to know that safe riders are noticed and awarded for their actions, as it’s always important to protect yourselves on the road!

The post shared by Lee soon went viral, and people in the comments were incredibly supportive and praised Lee for safe riding, and the officer for noticing.

Thank you Lee for being a role model, and to the TP for this great initiative!